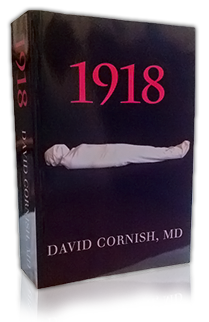 Noble had dressed a number of superficial wounds that afternoon, and tried to ensure patients were all receiving enough pain control.  Later a Petty Officer First Class with a hospital Corpsman rating walked over to him.  “Major, I wonder if I can ask for some help.  Lieutenant Commander Mullen is in surgery and isn’t available right now.”

“Well, there is a Seaman who seems pretty sick,” said the Petty Officer.

Without any more discussion, the two men walked to an adjoining room with walls lined with attached folded cots containing sickbay patients.

The Petty Officer stopped by the cot of a man who was diaphoretic and in a great deal of pain.

“Major, Seaman McCarthy fell from a ladder yesterday, and landed on his right anterior thigh.  He had some minor pain with a bruise until about four hours ago.  The pain then greatly increased very suddenly.  He has marked tenderness of his right thigh, has a temperature of 101° F, and has a blood pressure of 95/65.  But, other than a bruise and some minor swelling, I really don’t see anything else.  I’ve given him some codeine, but it hasn’t helped much.”

Noble walked closer to the patient and put his right hand on the man’s forehead.  He also placed his left hand first and second fingers on the Seaman’s left radial pulse.  His heart rate was 110.  “How are you feeling, Son?” Noble asked.

“Can you bend your right knee?” asked Noble, as he palpated the patient’s right thigh.

Noble looked closely at the man’s right leg.  He felt the skin along the length of the leg, and palpated its muscles as well as the right knee.  Beyond a small lower right thigh bruise and some modest swelling, the Petty Officer was right.  There was no other visible abnormality.

Noble said to the Seaman, “I need to take a small needle and place it into your lower thigh.  Is that all right, sailor?”

The Petty Officer left for a few minutes, and returned with a syringe, an eighteen gauge needle, and some sterile saline.  Noble cleaned off the man’s skin in an area about four inches from the superior aspect of the sailor’s right knee.  He drew up a few milliliters of saline into the syringe.  He then quickly inserted the needle about an inch into the man’s thigh, while drawing back on the syringe plunger.  A small amount of yellow-pink fluid was drawn into the syringe.  The sailor grimaced with the procedure, but did not make a sound.

Noble took the syringe to a small table located at the side of the room.  On the table were a number of bottles of different sizes that contained various colored liquids within them.   There was also a microscope.  Right next to the table was a sink.

Noble placed a sample of the syringe yellow-pink fluid onto a glass slide with a tiny wire loop with a long handle.  He allowed the sample to air-dry for a few minutes, and then used a flame from a candle on the table to heat fix the specimen onto the glass slide.  From a bottle marked “Crystal Violet”, he placed a drop of blue liquid onto the glass slide for one minute.  This was washed gently with tap water from a small dropper.  Gram’s iodine (named for the inventor, Dr.  Christian Gram) was applied to the slide for one minute.  This was again washed with tap water.  A dropper was then used to add 95% alcohol until drippings from the slide were clear.  A tap water rinse was placed on the slide.  A counterstain with Safranin was applied for 45 seconds.  A final rinse with tap water was used a fourth time.  To complete the process of gram staining, the glass slide was dried with bibulous paper.

Noble sat upon a stool at the small table, placed the prepared glass slide onto the microscope stage, applied a drop of oil onto the slide with a cover slip, and began to study the specimen.  He saw a few polymorphonuclear blood cells and very large numbers of gram-positive cocci in chains.  The sadness that comes from a bad diagnosis came over Noble, as he stood up and walked back to the Petty Officer and his patient.

“Please have general surgery prepare this patient for an aggressive debridement of the right quadriceps muscle immediately”, said Noble.

Noble put his right arm around the back of the Corpsman, and walked a few steps away from the patient.  Noble whispered, “The sailor has developed spontaneous gangrenous myositis of his right quadriceps that is likely due to Streptococcus pyogenes.  Very rare, and associated with nearly a 100% mortality.  His only hope is surgical debridement as soon as possible.  The only good sign is that we have caught this before any dermal signs have appeared.  Please act quickly.”

The Petty Officer hurried off to contact general surgery.  Noble walked slowly back to the Seaman.  He held his hand as he told him of the pending surgery.  He did not tell him of the likely outcome.

The Seaman looked straight away into Nobles eyes and said, “Thank you, doc.  I know you’ve done your best for me.  I want you to know that I really appreciate it.”

Noble just smiled, patted the man’s hand, and left the room.  As he did so, tears welled up in Noble’s eyes.  Seaman McCarthy had his whole life ahead of him.  He was strong and brave.  He was without any chronic medical problems whatsoever, and had done nothing to deserve what was coming.  Yet, the young man now faced the battle of his life.  This was so unfair and unjust.  However, microbes do not know or care about fairness and justice.  Noble walked out onto one of the lower level decks, watched the sea, and waited to gain enough composure to return to an omnipresent battle with the microbes.